Ivan approached myself and a business colleague at a critical stage in the project. He had written a outline of the story and created around a dozen paintings, but wasn’t sure what to do next. In Ivan’s own words he approached me “when it was essential he had a minder of sorts, a one-stop-shop to get it sorted” and that was

the brief, “to get it sorted”.

We created a company jointly owned by the creator / Artist, my business colleague and myself and began the task of  identifying all the elements of the intellectual property and to ensure it was legally protected.

As a focus of that exercise, we created a limited edition coffee table book  that contained all the images and story that had been produced to that point. It had the dual purpose of identifying the property and focused our attention on product development and the potential revenue streams that could be explored, one of those obviously being sales of the book.

It became pretty evident early on that the product was made for the screen. Ivan had begun to build a relationship with Sir Richard Taylor of Weta Workshop and Lord of the Rings fame, and that relationship continued to grow and develop as the property and project became more and more defined.

Sir Richard loved the property, which resulted in Weta Workshop developing a series of bronze sculptures that have been sold extensively, along with the art and coffee table book, through a number of high end art outlets in a number of countries around the world. 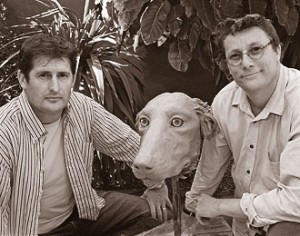 With Sir Richard’s support and industry connections we approached a number of film studios in the States to explore the potential of developing a movie. At the heart of our pitch was the coffee table book and the bronzes that brought the world alive. In 2009 Warner Bros took an option on the property, appointed Akiva Goldsman, of  “the Da Vinci Code” and “Angels and Demons” fame, as producer and began an extensive period of product testing and screenplay development.

Working in parallel with the script writers in LA, we commissioned a local writer to develop the story and  in 2011 sold the publishing rights  to Grove Atlantic in

The book entitled  “Alveridgea & The Legend of the Lonely Dog, was published the following year and the first edition has now sold out.

The movie project is still a work in progress, which seems to be the nature of  the movie scene. However the life and world of Lonely Dog continues, as a treasure trove of collectible limited edition art, artifacts, bronzes and books capture the hearts and minds of an ever increasing customer and fan base. Can’t wait till the time Lonely Dog hits the big screen, and millions become captivated by this magical world.